What do Los Angeles, New York, Philadelphia, San Francisco, Washington DC, and pretty much ever other big city in the United States have in common?

E) All of the above

If you answered E, you're correct, however, this is where we leave pollution, homelessness, and drug addiction to talk about something much more important: Chinatown.

I will do my best to describe the sights, smells, sounds, and general "feels" present in Chinatown, Philadelphia but before I jump into a soliloquy, a little history:

In the mid-late 19th century, Cantonese immigrants made their way to Philadelphia, opening laundries and restaurants near the commercial wharves. Chinatown was born. Over the years, Chinatown has grown, shrunk (as a result of the Convention Center and Expressway), and now, become development-restricted as a result of grassroots groups fighting to preserve Chinatown. A walk in the neighborhood will present you with a smorgasbord of Asian restaurants, street vendors, bakeries, funeral homes, and grocery stores. Census records indicate Chinatown residents are mostly of Chinese, Vietnamese, Thai, and Cambodian with a sprinkle of Korean, Japanese, and Filipino.

Now that we've been properly educated on the locale, let's begin the story.

It was a slow Wednesday afternoon at work which prompted my weekend daydream. My wife and son were in California enjoying some time with my parents. I would be alone. A situation which had two possible outcomes: (1) Boredom (2) Adventure. Having had my fill of boredom during the week, I craved adventure. But what to do? Where to go?

Before addressing the important questions of what and where, there was something I need I would need regardless of the answers: film. My Ziploc "film bag" lay empty in the fridge. I had recently shot my last roll of film (Kentmere 100) and for some strange reason, didn't immediately order more. I was in quite the predicament. I knew an order to B&H wouldn't make it in time. The window for a 2-day Prime Friday delivery had passed, regardless, I made an order for 3 rolls of Kodak TRI-X. With a Saturday delivery, it would be a gamble. There was a chance, albeit small, that the film would arrive before I headed out for my adventure. Regardless, the film would eventually get used but I needed to ensure I had film for my weekend. I was left with one option: go to the film. This would be my Hajj.

With "go to the film" in mind, I knew my adventure needed to take place in a large city. That is where the film was. I began to list my options:

A) Washington DC (too close)

B) Baltimore (way too close)

C) New York (a bit too much time in the car)

D) San Francisco (way too poor for a weekend getaway)

For a moment I was Goldilocks and Philadelphia was the Baby Bear's porridge. Just right. With my destination decided, I did a quick google and decided Webb Cam located on the corner of Vine and N 12th Street would be my purveyor of film.

The work week came to a close and I awoke Saturday morning, ready for my journey. EZ-Pass loaded with funds and Canon EOS Kiss III fitted with a 50mm lens, I was ready to go. Before heading out, I did one last doorstep scan to ensure Amazon hadn't exceeded my expectations but my expectations had been met: no delivery.

After in the city and parking in a budget-conscious garage, I hiked my way to Webb Cam. As I opened the door to the store, a weird feeling passed over me. This was the first time I was stepping foot into a brick and mortar store dedicated to cameras. I had been photographing off and on for over 10 years and until now, had made all my purchases online. Sure, years ago I had gone to drug stores like CVS or Walgreen's to purchase film or ventured to Costco to pick up developed images but for all intents and purposes, this was a first experience in an unadulterated camera shop. It was a photographers paradise. A clutter of studio lighting, new and used cameras, and film in every shape and color. Having read (multiple times) Hermann Hesse's Siddhartha, I wondered...was this enlightenment? Had I transformed into an exalted being?

My meditation was broken with a question, to which I answered, "Film...I need film."

I was beckoned over to the counter where I was handed a sheet with various films and their respective rates. I knew what I wanted and I told him: "3 rolls of TRI-X, please."

But then I second-guessed myself...something overcame me and as he was reaching in the fridge to fetch my ammo, I yelled out "Actually, make that 2 TRI-X, 1 HP5 Plus." I purchased, unboxed the rolls, loaded the camera some TRI-X, and threw the other cartridges into my back pocket. The first step out of the shop was a hard one but over the course of the day, that first step was followed by 23,198 more.

Out of convenience, I walked a few streets over to start my photographic barrage in Chinatown. With every step closer to the heart of Chinatown, the population became more homogeneous. Eventually, I was an outlier. I, for once, was the minority. I was now living in their world. After a few questioning glances, my presence was eventually accepted and I wandered the streets freely, camera in hand.

The mannerisms, smells, noises, flurry of colors...they transported me back to the Summer of 2016 when I spent I few weeks traveling around Hong Kong, Macau, Taiwan, and China. It is amazing how culture and tradition shape the physical environment in which we live. The density of the shops, the way goods were presented, the means by which promotions were plastered on windows...it was Kowloon, Hong Kong reincarnate. If there ever was a street photographer's paradise, this was it.

Each frame was a microcosm of Chinatown.

Men perched on steps smoked cheap, imported cigarettes, watching as neighbors went in and out of nearby shops. Elderly women donning wide-brim sun hats expertly examined produce. A visitor haggled with the parking attendant over the outrageous hourly rate. A half-visible man repaired something under a "Jade Harbor" awning...precariously perched atop a ladder. One swift kick away from a broken arm.

Transport seemed to be the day's theme as dolly-wielding men carried freshly unloaded goods from the back of inconspicuous delivery trucks, to the front of their respective stores. 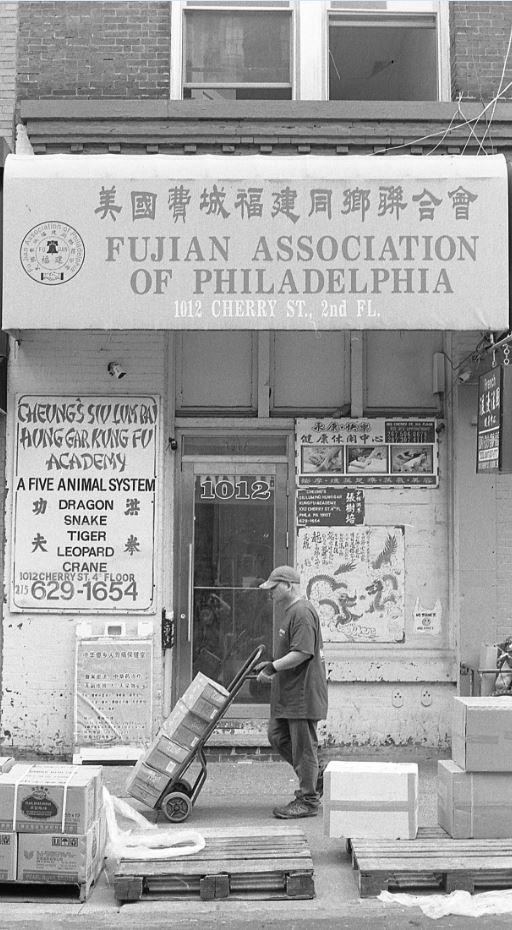 The juxtaposition of generations as an elderly couple passed a pair of youth hawking semi-freshly steamed sweet buns.

An old man waiting for his ride while single-finger texting. Head pushed forward, neck bending in a physics-defying manner. Somebody call a chiropractor. 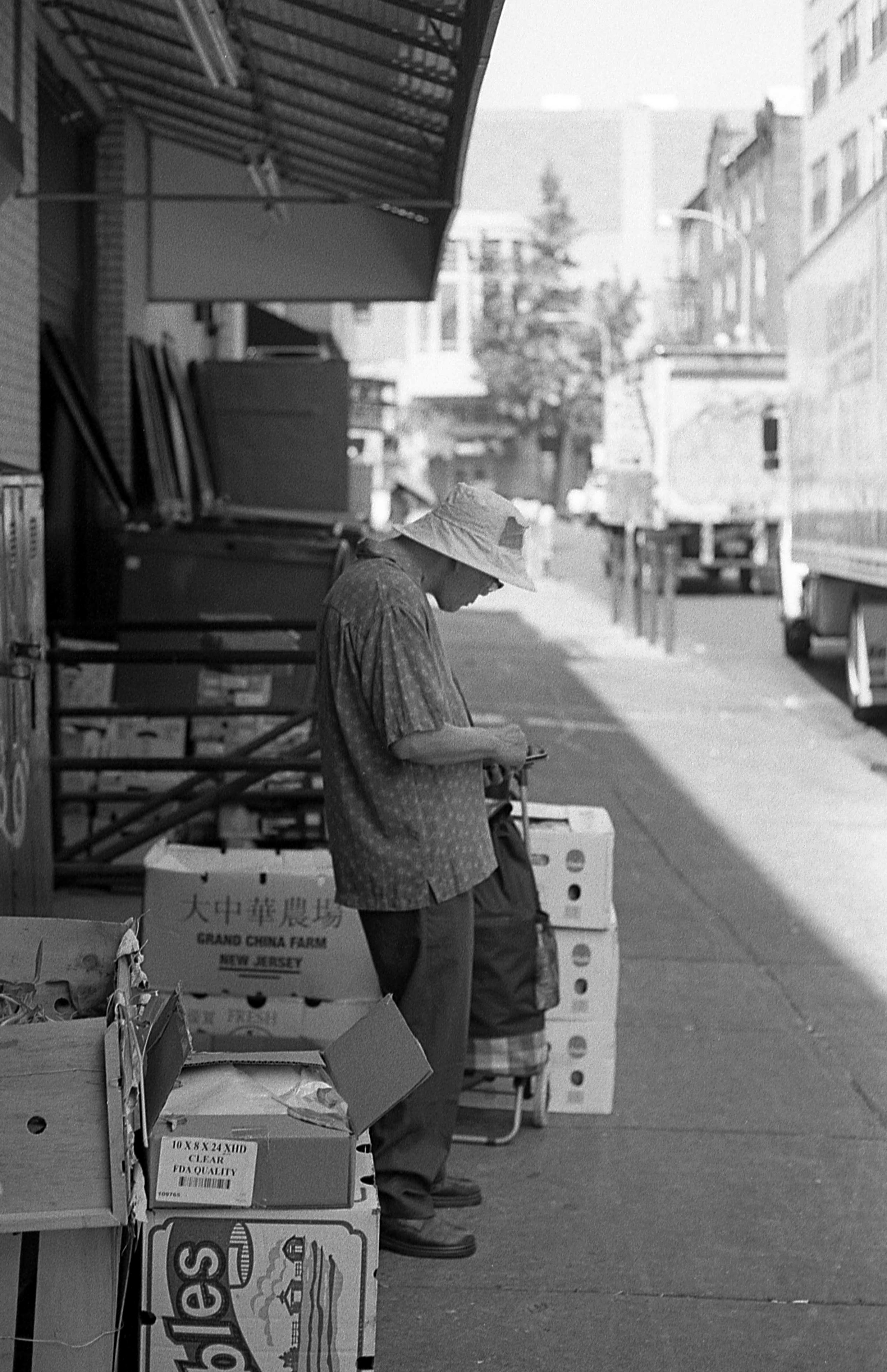 I spent hours wandering Chinatown aimlessly as unique opportunities continuously presented themselves before my lens. I began to feel like I had something special. This roll was my "Pet Sounds." I could try to explain the magic that unfolded over those 3 hours in Chinatown but I wouldn't do it justice. For once, I'll let the pictures tell the story. 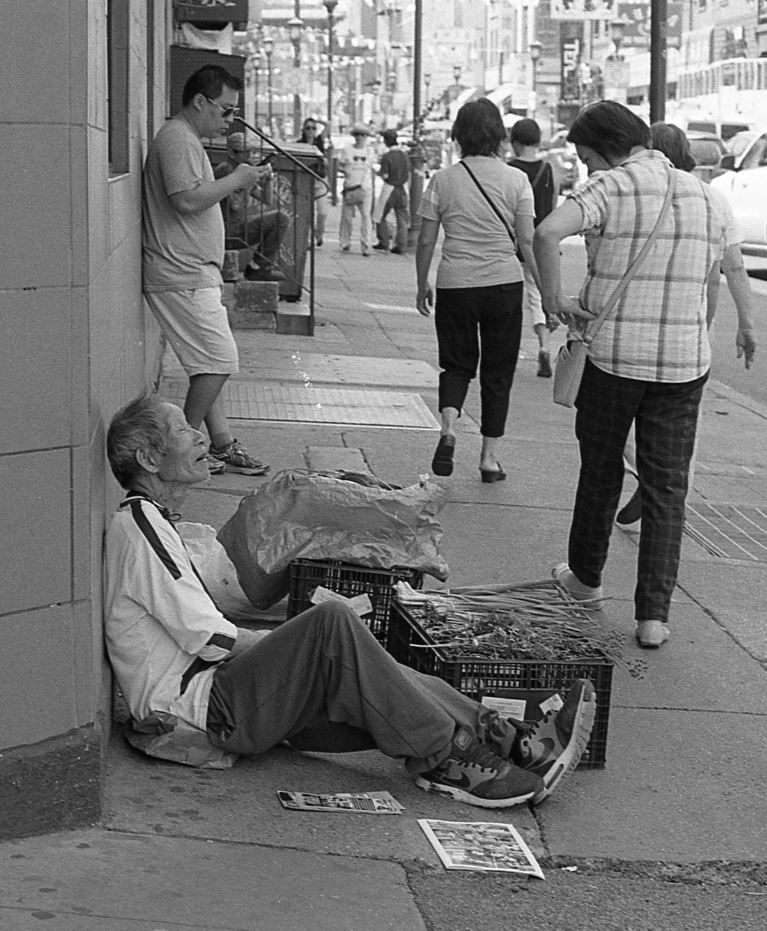 Roll #64: The Colossus of Clout